Old trends are made new again with our vintage engagement rings. We take new techniques and apply them to old styles to create timeless works of art. You’re sure to find something special. 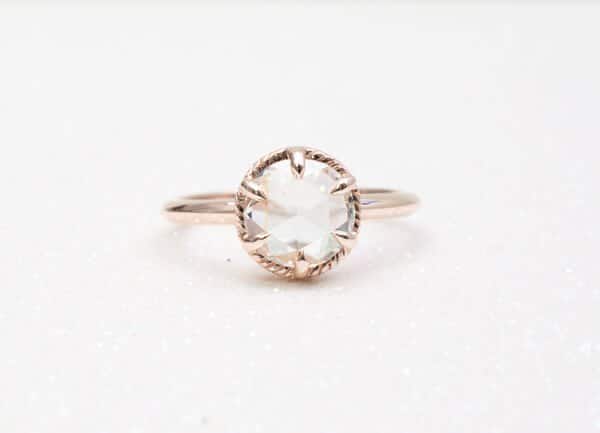 Influenced by the styles of the past, these gorgeous, romantic engagement rings are heirlooms in the making. Whether because of the delicate, Victorian-inspired filigree designs, the bold individuality of Art Deco styles, or the larger-than-life dazzle popular in the Retro era, each style in our antique-inspired collection is gorgeous piece.

Styles of the Past

Our antique-inspired pieces take a wide range of inspiration. From the Victorian era we take the styles of jewellery made popular by Queen Victoria’s mourning for her husband. The gold and jet blacks of this period lend many different pieces the timeless look that you now love.

Towards the end of this era, diamond mines were discovered in South Africa, which led to the creation of the solitaire engagement ring. At the time, society was going through the beginnings of an industrial revolution. The themes present in Victorian jewellery captures that feeling.

When we craft a piece inspired by the Victorian era, we often use golds and blacks, along with solitaire diamonds for stunning, unique pieces that can’t be found from any other era.

The beginnings of the Edwardian era saw the rise of platinum in jewellery, which remains popular even today. Jewellery from this period relied heavily on the strength that platinum provides.

This means that many pieces are extremely delicate and light. In addition, these pieces featured as many diamonds as possible. Some of these designs also used sapphires, aquamarines, and green demantoid garnets.

Additionally, a new type of decorative enhancement called “milgraining” was used extensively during this period. Milgraining involves a small border of platinum beads set around the edges of a piece of jewellery that adds a soft, elegant look.

The pieces we craft that are inspired by the Edwardian era are extremely delicate and light. With the aid of more modern technology, we can make these delicate, airy rings even more delicate and beautiful.

The Art Nouveau period came about as an artistic revolt against the technologies created in the industrial age. The pieces that came from this time were always hand-crafted and creatively designed. These rings captured the essence of the female form.

Instead of using diamonds as center pieces, these rings used moonstones, opal, and agate. When diamonds were used, it was as an accent. Many Japanese themes, such as nature, birds, and even dragons were commonly used as well.

The most important technique to come out of this time was enameling. This art was truly perfected, and often used “plique a jour”, which was a technique that resulted in a stained glass-like effect.

The Art Deco era came about as a result of World War I. Women were needed to take over men’s roles, and also gained increased independence through the right to vote. This new independence ushered in a new attitude that was reflected in the jewellery created at the time.

The pieces we create that are inspired by the era feature the straight, clean lines that were common. We use gorgeous cuts on sapphires, rubies, and emeralds to fully represent the themes of the time.

Hollywood and its glamour began the influence of retro jewellery. It is big, bold, and three dimensional. Large emerald cut semi-precious gemstones were the stars of the era. In particular, amethyst, aquamarine, and citrine were used.

They were often accented by smaller diamonds and calibre cut rubies and sapphires. Due to a shortage of platinum brought on by World War II, gold became the metal of choice.

Retro-inspired pieces we create are bold and bigger than life. We use big gemstones to create a powerful impact, all supported by gorgeous, flowing gold halo bands.

Whatever era you love, you’re sure to find a piece that inspires the confidence that you feel. Contact us now to see our selection of antique style engagement rings, or start creating your own custom engagement ring.

We are here to help. Ask a question or request an appointment below.

Available By Appointment Only.

Evening and Saturday Consultations are Available

Enter your information below